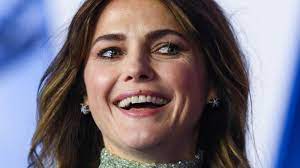 Keri Russell is an American actress best known for her roles in Felicity, Mission: Impossible III, Dawn of the Planet of the Apes, and The Americans. She began her career as a child actress in the Mickey Mouse Club, before appearing in the television series All My Children. Her breakthrough role came in 1998 when she was cast as Felicity Porter in the titular role of the television series Felicity. The role earned her a Golden Globe and a Television Critics Association Award. In 2006, she starred in Mission: Impossible III and in 2014, she starred in Dawn of the Planet of the Apes. In 2013, she began her role as Elizabeth Jennings in the critically acclaimed television series The Americans. The role earned her multiple Emmy and Golden Globe nominations, and in 2017, she won the Critics’ Choice Television Award for Best Actress in a Drama Series.

• She has a son, River, with actor Shane Deary, whom she was married to from 2006 to 2013.
• She was born in Fountain Valley, California, but raised in a small town in the mountains of Colorado.
• She began her acting career at age 15, when she appeared in the television series Mickey Mouse Club.
• She was a member of the show’s all-star cast, alongside Justin Timberlake and Britney Spears.
• She is a classically trained dancer, having studied ballet, tap, and jazz from an early age.
• She was nominated for an Emmy Award in 2008 for her role in the television series “Felicity”.
• She has appeared in several films, including August Rush, Bedtime Stories, and Mission: Impossible III.
• She has also starred in a number of Broadway productions, including The Public Theater’s production of “Burn This”.
• She has been a spokesperson for Pantene Pro-V hair products since 2002.
• She is a three-time Emmy Award nominee, having been nominated in 2007, 2008, and 2009.
• She was the recipient of a Golden Globe Award for Best Actress in a Television Series in 2008.
• She is an avid supporter of the Humane Society and has adopted two rescue dogs.
• She has a tattoo of a cross on her left wrist that she got when she was 16.
• She is a vegetarian, and has been for most of her life.
• She was featured in a Gap campaign in 2009.
• She was a member of the short-lived girl group “The Party” in the early 90s.
• She has appeared on the covers of numerous magazines, including Entertainment Weekly, Maxim, and InStyle.
• She is a fan of the band Radiohead.
• She was a guest judge on the hit reality show “So You Think You Can Dance” in 2009.
• She was the recipient of the Variety Power of Women Award in 2018.
• She is a member of the Academy of Motion Picture Arts and Sciences.
• She is an executive producer on the television series “The Americans”.
• She has a star on the Hollywood Walk of Fame.
• She is the founder of the charity “The Keri Russell Foundation”.
• She has been nominated for