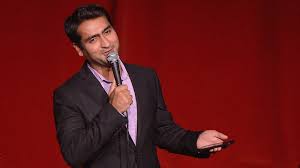 Kumail Nanjiani is an Emmy-nominated Pakistani-American comedian, actor, writer, and podcast host. He is best known for his roles in the HBO series Silicon Valley and the romantic comedy The Big Sick. Nanjiani has also appeared in the films Stuber, Men in Black: International, and The Lovebirds. He is the host of the popular podcast The X-Files Files, and he has released two stand-up comedy specials on Comedy Central. Nanjiani is also an activist and has been an outspoken advocate for diversity in Hollywood.

• He was born in Karachi, Pakistan in 1978
• He moved to the United States in 2007 to pursue his career in comedy
• He is a stand-up comedian and actor
• He was nominated for a Primetime Emmy Award for Outstanding Writing for a Comedy Series for his work on Silicon Valley
• He is an avid video-game player
• He is an outspoken advocate for diversity in Hollywood
• He was the first South Asian to appear on the cover of Rolling Stone
• He is a vegan
• He is the co-host of the podcast “The KmeleFoster Show”
• He was a guest on the late-night talk show “Conan”
• He appeared as a guest on an episode of “The Big Bang Theory”
• He starred as the lead role in the 2017 romantic comedy “The Big Sick”
• He was the voice of a character in the animated movie “The Lego Movie 2: The Second Part”
• He was the voice of the character “Beta” in the movie “Storks”
• He was the host of the 2017 MTV Movie & TV Awards
• He was a writer for the “Saturday Night Live” Weekend Update segment
• He is a regular on the Comedy Central show “The Meltdown with Jonah and Kumail”
• He is the co-creator and executive producer of the HBO series “Silicon Valley”
• He was the co-writer, executive producer and host of the documentary series “The X-Files: Origins”
• He is the co-host of the podcast “The Indoor Kids”
• He is an investor in the online comic strip “Penny Arcade”
• He is a regular on the podcast “Comedy Bang! Bang!”
• He was a guest on the podcast “WTF with Marc Maron”
• He is a founding member of the improv comedy group “The Business”
• He is a regular guest on the podcast “You Made It Weird with Pete Holmes”
• He has a recurring role on the television series “Portlandia”
• He is the creator and host of the web series “The Meltdown with Jonah and Kumail”
• He provided the voice of the character “Gru” in the 2017 animated movie “Despicable Me 3